Lately, I've decided to start growing my High Elf army. I've played a handful of games of Warhammer Fantasy Battle and Kings of War with what I have now, and I'm re-learning a lesson that I'd forgotten: namely that most massed battle games aren't as much fun as smaller games. Its not that games I've played haven't been fun per se, its that feeling that they'd be so much more interesting with more units. To that end, I'm putting some more paint on some new units for my High Elves.


These old models paint up so quickly with assembly line techniques. And the nostalgia I get painting them keeps me well motivated, so this should skip along pretty fast. I'm going to graduate out the command models currently in my missile units to serve in melee formations, so I've been painting up some bowmen to replace them.

I also finished up a test model for my Imperial Fists Assault Squad. It uses two different kits and the shield and jump pack are resin models from Kromlech. After all the bits and extras, I probably should have just ordered the standard assault squad from Forge World for cheaper - but this feels more unique and more "mine".

I hope to get at least the first half of this squad finished in the coming week. This should be the last infantry unit for my Imperial Fists for a good, long while. I'm kinda excited to finish them and then dig into some tanks!

Day Late Due to Nerding

I usually try to update on a Sunday, but this weekend was a little full. But here we are! First up, I've got ten more Imperial Fists added to my Horus Heresy army.

This brings me to four ten-man tactical squads in the army. Along with a ten-man Breacher Squad and a ten-man Tactical Support unit. My next unit for the army will be an Assault Squad, giving me seven Troop selections, which doesn't seem too shabby to me.

In addition to painting this weekend, I also got in some gaming. I took my Kharadron Overlords out for another spin, this time against the crazily mobile and magical Stormcast Eternals. I knew the Stormcast were tough, but wow - I didn't realize just how hard hitting they were.

I'm really enjoying playing the Kharadron Overlords. They offer a nice mix of shooting, mobility and squishiness that makes commanding them a bit of a challenge. This game saw me play much closer to "competent" as I remembered and used most of my army special abilities and utilized the shooting phase in a much more correct way. I'm looking forward to getting more games in.

I also got in some role-playing gaming - I've been running a mini-campaign with a Gamma World theme for my group. They've been trying to secure an Atomic Totem (Nuclear Missile) for their village and ended up having to transport it across a deadly highway populated by giant Kaiju. I created a little mini game where copilots had to try to "Drift" a la Pacific Rim.

It was a lot of crazy fun and the group successfully got their totem off the table, but just! The mini game was successful enough that I might develop it into something in my spare time, but that's probably just the dice and Mountain Dew talking. I dunno.

Trying to continue with the weekly update... I've done it twice now, so I'm totally gonna keep it up all year, right? Ha! We shall see. Most of my painting this week has been one-off figures and prep work, so not super exciting. 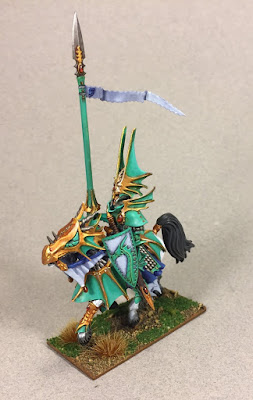 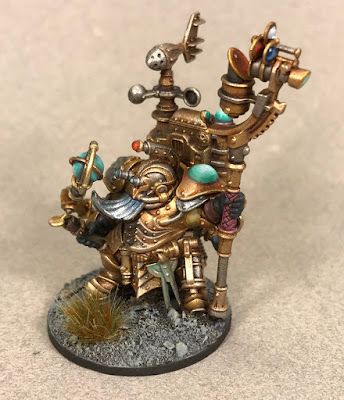 I finished up two single figs this week. First was a High Elf Dragon Prince. I needed a commander model for an upcoming game of Kings of War and this guy had been languishing on my painting desk for a while. I figured he'd make a good Elf King to game with. He also acts as a test scheme for a full unit of these guys - a project I should get cracking on.

Later in the week, I cranked out a quick Aethermic Navigator hero for my Kharadron Overlords. This was the last model I needed to bring me to a 2000 point army. I ended up having to mail order him directly from Games Workshop, as no local stores or Amazon dealers carried him in stock. So much for giving the FLGS the business if they can't get what I want. Ugh. In any case, I should take some nice beauty shots of the whole army at some point, because I think I'm done painting Sky Dorfs for a little while. 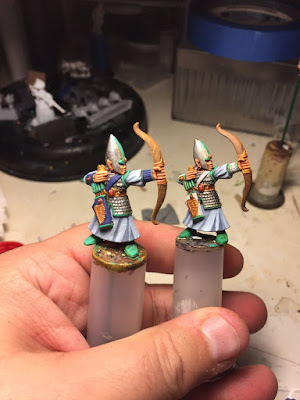 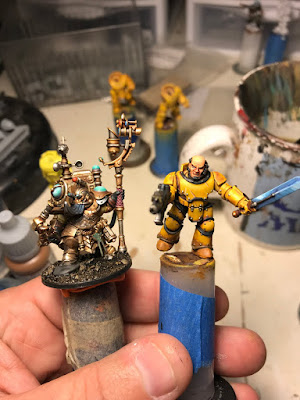 I also worked on a few more High Elf archers and, you guessed it - started ANOTHER Tactical Squad for the Horus Heresy. This is the last one for a long, long time; I swear!

Finally, I wrapped the week up with some gaming. I managed to get in a small game of Kings of War to kick the tires on the system. Its fine. I like the simplicity of the game and it goes quickly, but I think we really need play it with larger forces. At 1000pts, everything dies just a little too fast. Until I can expand my army for the game, I think its hard to judge the game's merits.

Later, we played a big game of Age of Sigmar. I got to use my Kharadron Overlords against an immaculately painted Beastmen force. We had to control bits of falling stars that randomly arrived on the table. I decimated the Beastmen in a hail of bullets, but ended up chasing my own tail so much that I got blitzed when it came to scenario points. It was a ton of fun though, with a lot of back-and-forth.


Every time I play Age of Sigmar, I like it more. And I already liked it a lot. Its just a nice fun and intuitive game - even if it does use way too many die rolls. I've been on a bit of tear with it lately - a few weeks ago I got in a game against an amazingly painted Daughters of Khaine army. I managed to squeak out a victory with my Overlords on that one.

With the advent of the New Year, I'm going to try and make a real effort to keep this blog updated each week. Sometimes that seems pointless since I share a lot of WIP shots via Facebook or Twitter (@cwalton73 on Twitter), but I think its a worthwhile exercise to collect what I've done each week here. Lately, I've been making headway in getting my Kharadron Overlords to 2000 points by adding another Gunhauler.

I still need one more model to bring the force to 2k - an Aethermic Navigator. Despite my best efforts, it seems I can only get this model directly from Games Workshop. So now begins the painful waiting for it to ship. Ugh! In the meantime, I will console myself by building more Heresy marines.