This past week was kind of my first week back in the real hobby world, as opposed to having time off and spending most of it painting. As a result, it was more about finishing things up than anything else, but I managed to get a lot of projects off my painting table and into a cabinet or case.

First up was finishing the Plagueburst Crawler. I was super close to finishing last week, but couldn't quite make it. But here it is in all its glory(?).

Also really close to done was my Inquisitor kit-bash, Serevina Krauss - Inquisitor of the Ordo Xenos. I finished up her scanner and then threw her on a resin base I had left over from my Deathwatch: Overkill project.


At the beginning of the week I had also gotten in a bunker from the Wall of Martyrs line. I guess GW "found" some old stock and was selling it direct. It came in a bag with no instructions, but it was pretty easy to figure out how to build it. After assembly, it was a quick prime of black and then a spray of gunmetal and I was off to the races.

I also polished off my second Foetid Bloat Drone for my Death Guard. After doing the first one, I learned to build and undercoat this one in sub-assemblies which cut the painting time in half.


Over on Twitter, I've been participating in #hobbystreak (at least 30min of hobby a day, see how long your can get your streak to go) and I finally missed a day after Day 63. But, having done something paint-related everyday for 2 months I think I earned a night out of drinks with a friend. I'm not sure I'm going to track it again, but the next day I was working on the Bloat Drone so I'm not ready to rest on my laurels just yet.

Next up is some Imperial Fist stuff to bring my Heresy army to 2k pts.

Welp, after a short break its back to the regular routine of life. That means that, comparatively, I haven't made a ton of progress on stuff this week. I've managed to carve out a little time each night to maintain momentum and keep up with #hobbystreak. First up is some work on an Inquisitor conversion that I built a while back.


I've also been working on a Plagueburst Crawler for my Death Guard. I manage to work on one while the other dries. The 'Crawler is a nice kit and shouldn't take to much longer to complete.

If I can keep it up, by mid next week I'll also have done some kind of hobby assembly and/or painting every day for 62 days. Two months straight of at least 30 minutes of hobby a day! I think I may ease off for a little after that, but maybe I'm kidding myself.

Death Guard Are Shambling Into the New Year

I had a nice little winter vacation and I managed to get a ton of painting done on my Death Guard. I'm at about 50ish Power Levels right now (man, I can't wait till they just start calling them Points and get rid of the old system…) and I've still got another Bloat Drone and a Plagueburst Crawler on the way. Here's what a week of being a painting hermit got me: 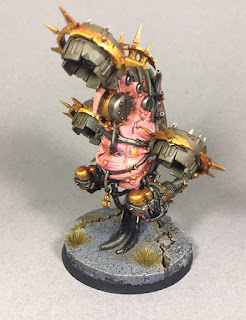 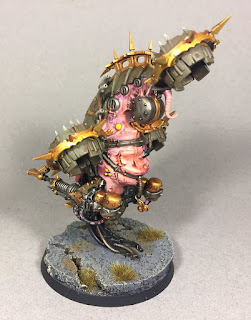 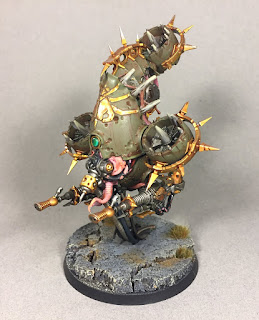 So all my Death Guard models from the Dark Imperium set are now done. I'll take some army shots once I add a few further units. Then, I think its onto Necromunda stuff and a few last odds and ends for my Imperial Fists Heresy Era stuff.

Over the last year, it looks like I painted some 220ish models (not including scenery) for various projects. This is both very cool and very sad. :)  Hope I can at least equal that amount in 2018!