Wooooo-hoooo! I finally finished the assault squad for my Heresy Era Imperial Fists. They were a bunch of work - between conversions and painting each felt like two models worth of effort - and I'm super happy to be done with them. Their completion brings me to about 4,000 points/ 200 Power Levels worth of guys and now I feel like I'm ready to play some really big games of Horus Heresy.

In celebration (?), I've tried to take some shots of the whole force together.

I started this project about 18 months ago - I think its a pretty good effort considering how much other stuff I've painted in between. Onto the next chunk!

Over the last week, Seattle saw some significant snowfall and the whole city pretty much shut-down. With work cancelled and the roads clogged, I was trapped in my home with nothing to do but build and paint models. I took it as an opportunity to knock out a commission and some units for my Death Guard army.

On Twitter I'd seen someone combine an AdMech Dunewalker with an Armiger and I knew I wanted to do something similar, but I'd put off doing it for a while. But my copious free time finally let me get around to it.

Once I finished up the first Armiger, I decided to convert another. Originally, I tried putting the Dune Walker's hull on Armiger legs; but it was way too AT-ST for me. Also, trying to attach a buzzsaw arm really spoiled the silhouette. In the end, I decided to convert the other Armiger hull and use that.

Finally, my friend Chris traded me some metal Norman infantry he had laying around for assembling and painting a Knight Castellan he owned. He wanted a Knight that had served with the Titan Legio Crucius for so long that they granted their heraldry. I finally had the time to build and knock this sucker out. It was a really interesting build, considering how much they did with mirroring frames. The whole thing was only 3 sprues. 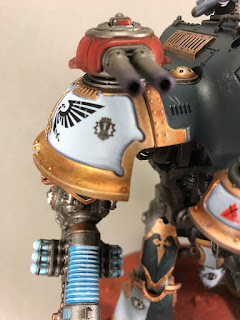 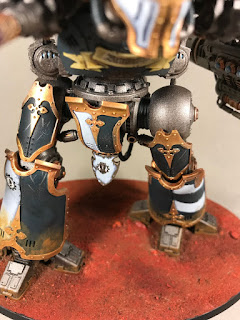 It feels good to get these machines off the painting the queue and onto the gaming table. Hopefully, I can do the second part soon!

Last week I posted a work in progress shot on a Foul Blightspawn for my Death Guard army and I managed to sort out a base for him up shortly thereafter. Here he is in all his feculent glory: 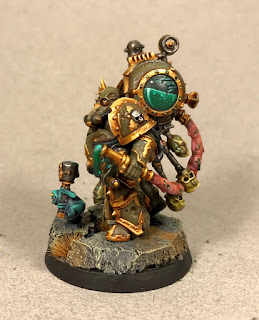 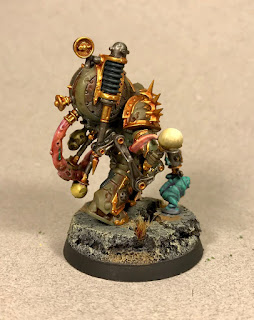 The weather here in Seattle has turned pretty cold, so its not optimal priming/spraying weather. Instead, I turned to models I already had primed before the weather turned; so that means more High Elves. The army is getting pretty sizable now. I've only got to complete four cavalry models and I should have enough to play a reasonably sized game now.

With the cold weather, I've also spent a bunch of time assembling models. I've got some more Death Guard stuff on the way as well as a Knight Castellan. Oh, and more Imperial Fists. Of course.

First on deck is the first five Assault Marines for my Horus Heresy army. These cats have been a lot of work - mostly due to the fact that I think I'm hitting burn-out for painting yellow infantry. That said, I'm super happy with them. I need to get cracking on the next five. This will bring me to about 4,000 points/200 power levels for my Imperial Fists.


After these cats were done, I needed a break so I turned my attention to a single model for my Death Guard army - a Foul Blightspawn. The current Death Guard are just such a treat to paint up. I've still got to work on a base for him, but he should be finished up pretty soon.

I've also been nattering away on more High Elves. I've still got paint up a command group for the spearmen, but the rest are finally based and ready to go. Pretty soon I'll have to turn my attention to some more cavalry for the force.

So far, I've managed to paint up about fifty models or so since January. Not too shabby, but I think I can increase my velocity some.