It All Looks Good On Paper

A few months ago, I got a wild hair up my butt and was seriously considering building a set of armies for a war game based on the Thirty Years War. I knew I wanted big blocks of pikes, at least 18 units per side, and I wanted to do the whole thing in 28mm. After careful consideration, I came to the conclusion:

There was no way I could commit to a project like that financially or time wise. The last time I'd done something that insane was for Napoleonics, and that had taken me damn near four years to complete. But I couldn't fully let go of the idea. I found myself picking up a copy of Peter Dennis' paper soldiers for an English Civil War game and thought to myself "Hey, stupid. You DRAW for a living. Why not try something like this? I bet if it was grand enough, it'd look awesome." So I set about trying my hand at designing and making my own paper soldiers.

It was a fun little side project that I'm still nattering away on. Paper minis will never replace 3D ones for me, but they are a quick and economical way get into playing war games. Additionally, if I run games with them at conventions, I'm less concerned with players breaking my precious models or ruining paint jobs by transporting armies.

In a shameless bit of self-promotion, I've also done some paper fantasy armies for use with my Shieldwall war games rules. Again, I'd love to have a Goblin army in 3D, but the time it'll take is a little prohibitive at the moment. So these are a nice, simple alternative. 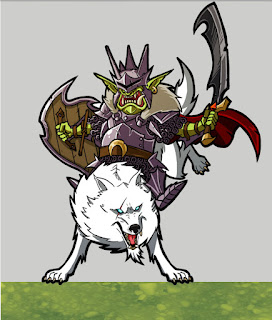 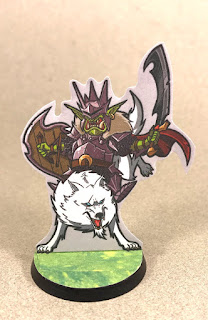 I've got a couple more armies in the queque - Undead and Halflings. I hope to do Dwarves and Servants of Anarchy soon after. For those who demand only the finest of 3D models, do not despair! I'm not hanging up my paint brush any time soon. In fact, I've been making good headway on my Imperial Roman army and am closing in on finishing that project soon(ish).